The society's principle publication is its biennial journal Review. In the 1990s the society produced Town Trails for Lurgan and Portadown which formed the basis of trails published by Craigavon Borough Council. More recently it has published two books, reprints of historical books by local authors. 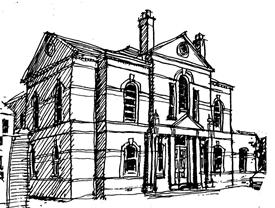 We launched the latest edition of Review, the society's biennial journal, in Craigavon Civic Centre on Tuesday 9th April 2019 at 7:45pm.

Copies of this and previous Reviews will shortly be available to purchase at the usual outllets at £6 each.

Some of the covers of Review published during the last 35 years.

Review Vol. 11 No. 1 was published in April 2019. Its 64 pages contain many articles on the history of the Craigavon and surrounding areas including a number of illustrations in full colour; to view a list of the contents of Vol. 11 No. 1 as a ".PDF" file click on the button below:


To order the latest issue of Review, please forward a your name, address and a cheque made payable to Craigavon Historical Society (see rates below) to the Honorary Secretary:

Some earlier editions of Review are still available to purchase at the same rate including recent reprints of Vol.10 Nos. 1 to 3 - contact the honorary secretary for more information. We have uploaded more than 200 articles from earlier Reviews on to this web site and you can view an index of these by clicking on the button below. Please note that the contents of recent Reviews may not appear on the web site for some years after time of publication. 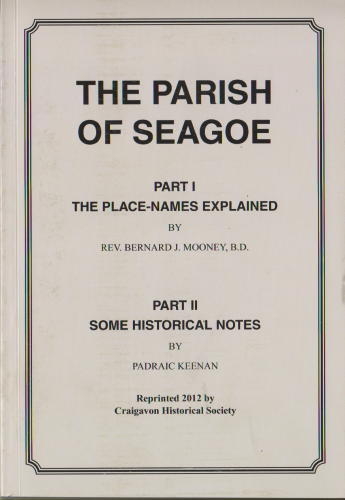 Craigavon Historical Society is proud to have republished an inspirational book on our local history - "The Parish of Seagoe". It was written in 1954 by Rev. Bernard J. Mooney and Padraic Keenan. Widely acclaimed then, after more than 60 years it remains an invaluable resource for anyone interested in the history of the area.

Dean Bernard Mooney's attachment to the Irish language combined with his sense of place led to his foundation membership of the Ulster Place-names Society in 1952. He was to later become the first chairman of our society in the late 1960s. Part I of "The Parish of Seagoe" is entitled "Place names explained" - written by Dean Mooney, it is a scholarly study of the derivation and meaning of many of the placenames in what was to become the Craigavon area. Part II "Some Historical Notes" is written by Padraic Keenan, a Newry journalist who had a deep concern for all aspects of local and parish history.

The Parish of Seagoe may be purchased direct from the society - click here for information about how to contact us. The price is £6.50 to UK, £7.50 to Éire and £10.00 to USA and Canada including postage and packing - cheques should be made payable to "Craigavon Historical Society". It may also be purchased direct for £5 from the shop at Lough Neagh Discovery Centre, Oxford Island, Lurgan.

First published in 1924, copies of the Society's reprint of Montiaghisms can be bought for £5.00 to UK, £6.00 to Éire each, including postage and packing - cheques should be made payable to "Craigavon Historical Society". This attractive little A5 booklet contains William Lutton's collection of dialect words and copies of pages taken from his original manuscript. The front cover is a photograph of the Bannfoot ferry which was the last hand operated cable ferry for vehicles in the British Isles. This booklet is a great read and makes an excellent present, particularly for those with Ulster roots.

This collection of dialect words and phrases was compiled by the late William Lutton eighty or ninety years ago, the words were at that time heard and noted by him. His residence was at Breagh, in the parish of Seagoe, Portadown, but they were largely collected from the district known as the Montiaghs, which is a boggy parish surrounding Lough Gullion, on the shores of Lough Neagh immediately west of Lurgan and north of Portadown, in the County of Armagh.

William Lutton was a man of some culture. Being intended for the medical profession, he studied for some years in Paris. Having curious conscientious objections to completing his medical course; he returned home, taking up the duties of a land and road surveyor, and was so engaged during his lifetime, which terminated 2nd November, 1870. He was born at Breagh on 15th August, 1807, and is buried in old Seagoe Churchyard. During his lifetime' he was a constant correspondent with his cousin, Anne Lutton, whose "Memorials of a Consecrated Life" was published in 1881. His father was Richard Lutton, a brother of the father of Anne Lutton; his mother was Anne Jones, of Ballyhannon, for whom he had a great affection. She died 13th February, 1857 at the age, of eighty. He was much employed in land surveying by Lord Lurgan, the Copes of Loughgall, and the Great Northern Railway; I have seen several of his survey maps, most skilfully laid down; with the printing like copperplate, having artistically drawn insets of houses, scenery, etc., all the work of a craftsman's hand. He amassed a considerable library largely of a religious nature, was a fair musician, constructing his own pipe organ. He also wrote a commentary on the Bible, a work that entailed continuous labour and research for many years. Highly esteemed for his probity and sterling qualities, he was much sought after, not only in his own parish, but in wider circles in questions of delicacy and dispute, when his judgment was always accepted for its fairness and wisdom. His wife's name was Jane Elliott, who, with their three children, survived the worthy man.

This collection contains numerous entries not now in use some have even passed from recollection, whilst many are peculiar to the Montiaghs - not known in other districts or found in other collections of Ulster dialect words. The number of items included contains about twenty-five per cent of purely Gaelic origin, which is a large average in Ulster dialect. The character of the users of these words and phrases is shown in the use of abusive epithets, which amount to over thirteen per cent., whilst terms of endearment do not reach the half of that figure. Special and peculiar household and agricultural words, as can readily be understood, amount to the considerable figure of seventeen per cent each, whilst industrial words only reach six per cent. Of course, this is only a rough, though fairly accurate, analysis of the list, which numbers about nine hundred entries. The compiler went to considerable trouble in the repetition of noun words and verb words, and also in denoting different parts of speech - this has been omitted as not now being of much interest or dialectic value. In no case has a word or meaning been added or altered; some have other meanings and uses at the present time, especially in other parts of Ulster; so it was thought advisable to let the work stand as written by such an accurate and careful recorder as William Lutton is shown to have been. It has been a great pleasure and satisfaction to me to edit the list, and to give a prominent place in Ulster lore to such a valuable addition to our dialect literature, which might have been lost but is now preserved in print for the first time.

To order a copy of Montiaghisms please forward a your name, address and a cheque made payable to Craigavon Historical Society (see rates below) to the Honorary Secretary - Mr John Trimble, 103 Drumgor Park, Craigavon, BT65 4AH, Northern Ireland. Price, including postage and packing, is £5.00 to UK and Ireland and £8.00 to USA and Canada.. 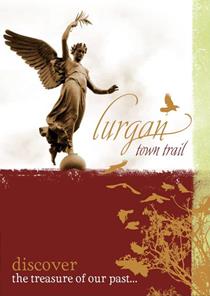 In the 1990s Craigavon Historical Society published Town Trails for the towns of Lurgan and Portadown illustrated with line drawings of many of the fine buildings in the towns.

Although the original town trails are now out of print they were later used by Craigavon Borough Council to produce updated colour editions of the trails. The illustration shows the cover of the Lurgan Town trail with the winged sculture on top of the Lurgan War memorial.

You can download the town trails for Lurgan and Portadown as PDF files by clicking on the links below: